Design and conception of several multi-media-applications for the Telekom exhibition stand at Cebit 2010.

The Multitouch-Table contains a menu which is based on the real physical movement of a grasland. By touching and tousling certain flowers the actual menu with subnavigation appears – then you chose the link you want to go to.

Have a look at the multimedia presentations of the Grass-Touch at Cebit 2010 here, which was created with sedna technology.

A so called ‚Gigapan‘, which is basically an extremely large picture, filled with information located in different areas of the picture (Gigapan). By zooming in the picture, you explore the area and find many more information. The appearance of the information in depth depends on the priority. It works hierarchically. The hidden Information shouldn’t be that important to get as the obvious, which is easier to find by area. Because this technology of displaying information is so new and innovative, there are still some experiences to make with.

This Multitouch-Table contains a ‚Gigapan‘, a vector-based illustration – showing a kind of universe, we called it ‚infoverse‘. You find several galaxies displaying information. This ‚infoverse‘ was already created and shown at the ‚IFA 2009‚. For this Cebit it was adapted to the specific design requirements and to the up-to-date-status.

Have a look at the sedna-based multimedia presentations of IFA 2009 here, which was created with sedna technology.

An impression of the stand. 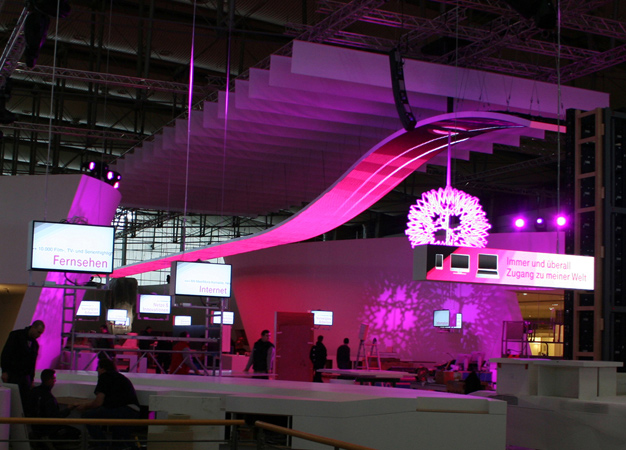